Contributing to a Global Network of Citizen Science Contributing to a Global Network of Citizen Science

Countless times I received messages from my family and friends saying “look what we found in the back yard Flor, what is it?”. First, I must confess that I like it very much and that I take the research very seriously because, besides, it always comes in handy for procrastination. Second, that most of the time I don’t know what organism it is, but I don’t stop until I dismantle the identity of the finding. With some clues obtained from the photos, an idea of what it could be and some googling I throw out the verdict: “It looks like a fake coral. South American hognose snake to be more precise. Let’s see, take a picture of the face, see if it’s snout is facing up, haha”. Sometimes you add some information, “It’s harmless! They are common snakes, but as they can be confused with the coral snake they carry the stigma of frightening people and they almost never survive a chance encounter, as in this case :/“.

Recording nature is a very common practice among people around the world. The beauty of the specimens themselves and the curiosity people have to know what they are, make it difficult to come across a bug without taking a picture of it. For this reason, for several years there have been online platforms that people join to please their naturalism. One of them is iNaturalist, a global citizen science network where people share their findings and help others to decipher their own. People from all over the world, naturalists, hobbyists, curious people and experts, log in and interact with the intention of exploring, sharing and learning more about the natural world around them. All you have to do is create a user account to get started. Then, for example, you go for a day to splash around in El Pinar and you meet a beautiful and irresistible blue cardinal, you take a picture of the animal and upload it, you mark the geographical location, what date it is and the time of the recording. If you don’t know the species, then you upload the record and leave it unidentified. Other people who see your photo will come to your rescue and suggest an identification: Blue Cardinal, Stephanophorus diadematus. On this platform, everyone can throw verdicts and the more they agree with a species the more the identification of the species is corroborated. That, ladies and gentlemen, is collaborative work! This is how countries get filled with observations, with species, with people registering and identifying. Seems like a good place to share the one with the snout turned up, doesn’t it?

Now, what perhaps not everyone knows is that the photo we uploaded when we went for the day to eat a barbecue at the beach can help (and in fact has been doing it for a long time) to the conservation of global biodiversity. Scientists around the world use this data to analyze the geographic distribution of animals and plants, the status of biological invasions, and how species’ behavior varies over time and space. Having a huge amount of dated and geographically located species observation data available allows us to answer a multitude of questions. For example, what dates are the first arrivals of migratory birds such as the plover or the lesser knot in the country and whether these dates are changing with climate change. Or, what are the areas where introduced, non-native and invasive species, such as the bullfrog or the blackberry, are recorded and how their presence in the territory advances over time. In addition, whether the pattern of spots on a margay is the same in Uruguay as in northern Brazil or what time of day foxes are usually seen in our country and whether that time of day is the same for other foxes in South America.

At Biodiversidata, the Uruguayan Consortium of Biodiversity Data, we are using data from observations and specimen collections to generate research that will allow us to make better decisions for the conservation of our natural heritage. We also want to improve access to knowledge about the biodiversity of our country, and that is why one of our founding principles is to make our data and results available to the scientific community and citizens.

For all the above, from Biodiversidata, we want to invite and motivate all the people to join and collaborate through the recording of their observations in the iNaturalist platform. Whether it is the smallest weed at on your house yard or the most colorful lizard in the county, all observations are important. By uploading your records you will be developing a citizen scientific community. In other words, contributing to and therefore transforming the scientific work in the world.

Our biodiversity needs us. 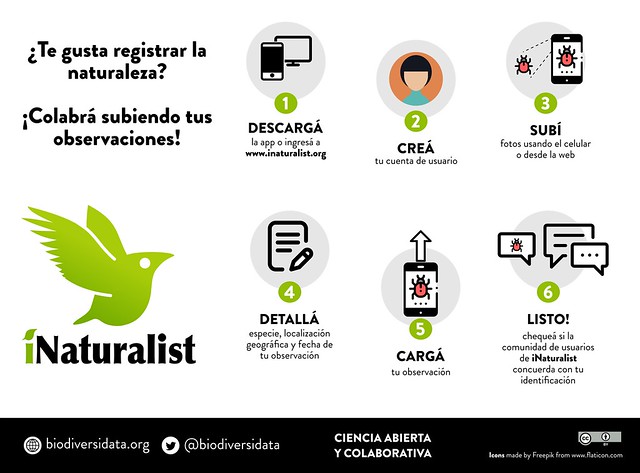